Our company has supported BME Formula Racing Team (BME FRT) for three years by making Ansys available for them, as well as holding trainings and consultations for them. They have recently revealed their newest race cars at the Hungaroring, which is a great opportunity to dive a bit deeper into their work, and see how they design these cars.

BME FRT was founded in 2008, and they have been participating in the Formula Student (FS) race series, which is solely for university students, ever since. In this series, the participating teams design, manufacture, procure and assemble the parts of their cars themselves, and they also have to take care of providing a suitable financial and organisational background for this. Until 2013, BME FRT designed vehicles with combustion engine, but since then they have only built electric vehicles. Since 2017 they also compete in the new Driverless category, therefore they built two cars this year as well, one for the Electric (EV) and one for the Driverless category. Their EV car has four-wheel drive, as it is equipped with four wheel-hub motors. It has a carbon fibre monocoque, and its main technical parameters can be seen in the table below. Just like in other racing series, FS cars are continuously getting better and better, with one of the most recent improvements being aerodynamic packages. These are present on most cars in the category nowadays, and the cars of BME FRT have also featured them in the past two years.

From an aerodynamic point of view, a car can be described with three main parameters: the downforce and drag it generates at any given speed, and the distribution of these compared to the centre of gravity of the car, which determines whether the car is understeery or oversteery. While the distribution influences the behaviour of the car, and different drivers have different distribution preferences, the downforce and drag have an objective effect on the car’s performance. The greater the drag a car experiences, the lower its speed is at any power output, or to put it another way, the more power it consumes at any given speed. On the other hand, the greater the downforce a car generates, the higher the lateral forces its tires can exert on the ground, therefore it has higher cornering speed, which leads to better lap times.

In Formula Student, the teams pitch their cars against each other on three different track types, in four disciplines:

It is evident from the event descriptions above that downforce has a greater impact on the car’s overall performance than drag, but the latter also has to be taken into account in a couple of disciplines. The team has quantified these effects with a parameter sensitivity test, with the results coming from laptime simulations and being visualized on the graphs below. They illustrate the influence of drag and downforce on the amount of points they can achieve in the different disciplines, with the base values (0%) corresponding to the parameters of their previous car. Due to the Endurance being worth way more points than the other disciplines combined, the Total change is quite close to the change in the Endurance points in all cases. 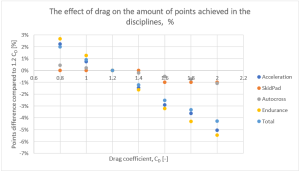 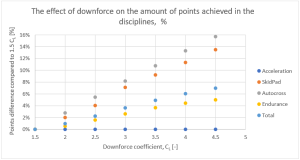 Design of the aerodynamic package

The team members started to design the aerodynamic package with the graphs above in mind. These enabled them to evaluate whether an aerodynamic element was worth putting on the car, as they could compare the points they would gain from the increased downforce due to the element being on the car with the points they would lose due to its drag and weight.  As a start, they simulated different front and rear wing concepts in 2D in Ansys Fluent. 2D simulations are useful because they enable the user to run a large amount of simulations in a short amount of time, therefore it is easy to determine which configurations have enough potential to be inspected in 3D as well. However, their main drawback is that 3D phenomena, for example vortices, are not present in them, even though they significantly influence a concept’s effectiveness.  During the 2D simulations, the different concepts included different aerofoils in various combinations with a range of chord lengths and angle of attack.

Concepts that proved to be promising during 2D simulations were examined in 3D as well, with the first step being the simulation of individual components, and if they performed as expected there as well, then the parts were combined with the chassis into a car, and the whole package was inspected as one.

After analysing the downforce and drag values, pressure contours, velocity profiles obtained from a given simulation, they determined the places where improvement was necessary, and designed new versions of the various components with a focus on these places.

They then combined the new parts with the rest of the package, simulated them, and if the developments showed an improvement in the overall performance of the car, the new versions became the reference for future simulations. They ran simulations at different speeds (10-30 m/s, which is typical of FS tracks) in order to ensure that the package functions well at all of the various track sections with different characteristics..

Taking into account the results of the parameter sensitivity analysis mentioned in the first chapter, the team focused mainly on increasing the downforce of their car during the design of the aerodynamic package. Then towards the end of the design phase, drag reducing elements were added to the car, while paying attention to the point gain arising from the reduced drag being higher than the point loss due to the potential downforce loss. One of these drag reducing solutions is the small 3D printed components glued to the front wing (highlighted in red below), which aim to direct air away from the tires, thus decreasing the tires’ wake and the car’s drag. Moreover, both the rear wing and front wing flaps were designed to have an adjustable angle of attack, so the team can set them to horizontal before the Acceleration discipline, where the decrease in drag due to this modification improves their result significantly. Even though this reduces the amount of downforce generated as well, this is not a problem in case of the Acceleration runs, as it can be seen on the graphs above.

By the end of the design phase, the team has been able to significantly improve the downforce of their car compared to last year’s one, with only a small increase in drag. As a consequence, they should be able to achieve 27 points more from the 675 available, which can mean quite a few places difference in the rankings in the crowded field of competitors.

Congratulations  to the BME Formula Racing Team for designing and building their racing cars this year; thank you very much the opportunity for participating at their roll-out event at the Hungaroring this year as well. We hope that we can continue this successful cooperation in the future!

(Thank so much the BME Formula Racing Team for the professional summary and for the pictures. )