A fuse is an electrical safety device, used to protect circuits from overcurrent, overload and ensuring the protection of the circuit. The most important part of the fuse is the low resistance metal wire included in a non-combustible material. It is used to connect to series with a circuit or the supply of device which needs to be protected from overcurrent or short circuit.

The working principle of the fuse is based on the thermal effect of the current. The conducting wire or strip melts when too much current flows through it, thereby interrupting the current. The electric conductor of the fuse is a low resistance component in the nominal operation of the circuit, which does not affect the nominal operation of the system connected to the power supply.

There are many types of fuses according to current carrying capacity, voltage rate, response characteristic, breaking capacity and size. Fig. 1 and 2 show two examples of the fuse. Fig. 1 shows a fuse used for automotive application and Fig. 2 shows a fuse for high power application.

After the conductor of the one-time use fuses burn out, the user has to manually replace it. These fuses are cheap in themselves, but the electronics and devices in which the fuse is used as a safety device are typically expensive. Therefore, it matters how the fuse works, whether it provides adequate protection for the device. It is important to emphasize careful design and understand the physical behaviour of it, in which numerical simulation is a great help.

The analysis of a fuse is a multiphysics task due to its operation. There are several options in the Ansys portfolio to handle this task, but here we want to focus primarily on Discovery AIM. Discovery AIM provides a solution for this coupled electrical and thermal problem, and besides the temperature-induced deformation can be easily examined.

Multiphysics Analysis of a Blade Fuse

The used example is a steady-state thermal-electric-stress problem. In majority multiphysics simulation means multiple software even in the initial design stage or the neglection of some effects. However, up to 80 percent of the cost of a product’s development is determined by the decisions you make early in the design process. Ansys Discovery AIM makes upfront simulation easy by combining intuitive, guided workflows, accurate simulation results in a complete simulation tool. Integrated geometry modelling based on Ansys Discovery SpaceClaim technology helps you create new 3D models, or edit/repair existing geometry. Whether a simulation includes electromagnetics, thermal, structures, or fluids or combinations thereof, all aspects of simulation workflow are included in the single-window design, which enables you to predict complete product performance with results you can trust.

Through this example, we demonstrate the multiphysics capabilities and accuracy of Discovery AIM. The results of AIM validated by three other software from Ansys portfolio (Maxwell 3D, Q3D Extractor, Mechanical) that are also suitable for the analysis of this multiphysics problem.

There is no need to deal with discretization settings because AIM intelligently creates an appropriate, physics aware mesh. Depending on whether you are solving nonlinear contact, fluids or topology optimization; AIM will automatically refine the mesh for contact surfaces, create boundary layers for fluid walls, save time and improve solution accuracy [3]. The finite element mesh of mechanical base simulations can be seen in Fig. 3. In this case, a physical aware mesh of Discovery AIM means fewer unknowns as the discretization in Mechanical, so faster computation with the same accuracy.

Table 1 shows a quantitative comparison between different solvers through the resistance and loss of the conducting part of the fuse. The difference is caused by the different approximation and solver technology in the background. 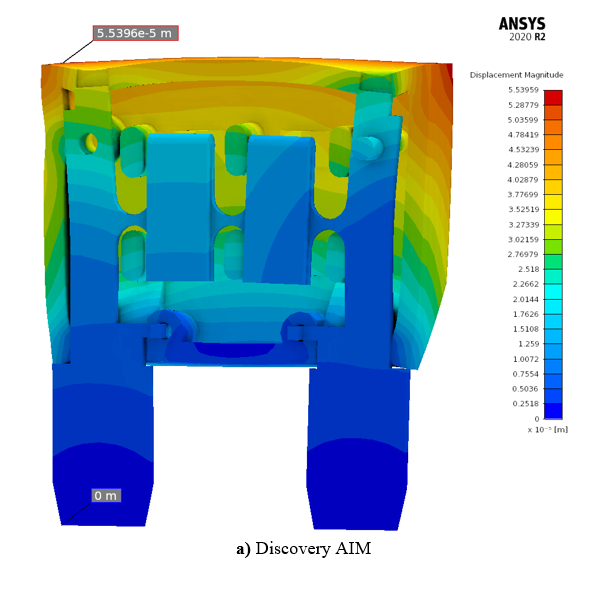 To determine the temperature distribution, an additional thermal solver of the AEDT Mechanical (with Icepak licensing) was also required for the Q3D Extractor and the Maxwell 3D. The Mechanical solution means, in this case, the Thermal-Electric solver.

Fig. 6 shows the final results of this analysis, the temperature-induced displacement. The results of Discovery AIM and Mechanical are practically the same, which also support that the accuracy of Discovery AIM does not only make the software suitable for pre-design analysis, but also for simulation and design process.

The analysis of current conduction with temperature-induced deformation using a single software environment is only possible in Discovery AIM and Mechanical. However, in the case of Mechanical, this also requires a coupling within the Ansys Workbench to accomplish this analysis. So, the easiest way of solving this multiphysics problem is to do it with Discovery AIM.

Discovery AIM is appropriate to design and analyse fuses for various applications under different operating conditions. Coupled electric – thermal – mechanical simulation with temperature dependent electrical and thermal material parameters enables engineers to study the thermal effects of the current distribution and the deformation.

The article was written by our software support engineer colleague, Marcsa Dániel.

WHY IS SPACECLAIM SOFTWARE USEFUL FOR CAD PREPARATION IN ENGINEERING SIMULATIONS?